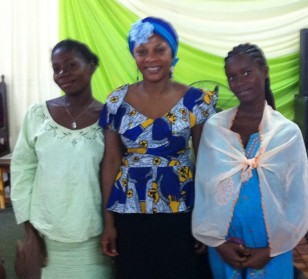 On Friday 25 July 2014 I left at 6 am from Baarn and arrived in plenty of time at Brussels Airport.
The plane took off at 12:00 pm and 8 ½ hours later I was in Freetown. From the airport I am by boat to Freetown Center hazards, the boat takes about 25 minutes and then I was at home.
Did you visit Mc the same evening ?
No I went to bed and the next morning I started working in the MC right away. We started with the demolition of all kinds of small buildings of wood and stone, that was quite a job, but when everything was cleaned up we had a great courtyard with lots of space.
We have all the rooms for the new residents cleaned and painted the walls. A friend has painted the logo on a wall.
Was the container with all the inventory on time at the port?
The container was perfectly on time, I had the goods cleared through customs and wanted to wait for you to empty the container and to furnish the rooms. But then I got your message on 5 August that British Airways no longer flew because of the Ebola and you did not come, and I was disappointed. 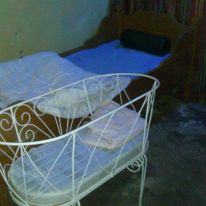 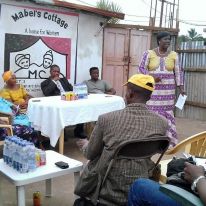 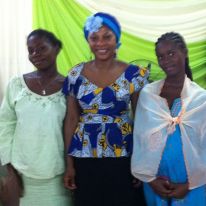 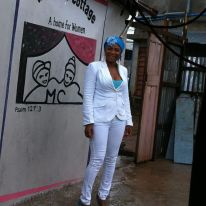 What have you been doing in the weeks you were there .
All appointments were scheduled with you, among other things, a press conference, T.V. Such performances and I have all brought forward and carried out without you. We have furnished the rooms and all sorted out for the arrival of our new residents.
How did you select the women.
My aunt (Aunt Rosie , the midwife in the Goderichziekenhuis where these women come for check) had selected 10 women . I've talked to all ten selected women and  subsequently  selected 5 who went a doctor  for investigation. There have been laboratory tests and from 4 out of 5 I received health certificates, they could be enrolled. The 5th did not go to see the doctor.
And who are the people of MC at the moment.
Unfortunately I have to send one of the four road. She wanted tot her mother after 2 days, which we accepted, but then another resident had to accompany her , and then she did not want to go anymore . also the next day she did not like to go if anyone was with her. When in some next days it was her turn to take care of the cooking, she went to the market for shopping , but she stayed away 3 hours and someone had seen her with a man. I told her to say honestly what was going on. She said she was back at her boyfriend and then I sent her away . They must adhere well to the agreements.
At the moment our guests are: Precious, Nancy en Adama.
Precious is 17 years and 5 months pregnant. She had a boyfriend , but says he has not made her pregnant , and  consequently abandoned her
Nancy is 16 years old and had already test contractions when I left , her baby could be born anytime . Nancy is raped, and do not know who is the father.
Adama is 19 years and 6 months pregnant. On her birthdayparty she was intoxicated  and probably got drugs. She does not know what happened , but lateron was found pregnant.
These 3 women are highly motivated to go back to go to school and/or learn a profession. also, there are still 2 women referred to the doctor, but since I had not received a health certificate from them and due to my early return they could no longer be invited in M.C.
What have you noticed of the Ebola virus in SL
Actually nothing. In the area where I was there were no sick people and I also heard nothing from family or others that they knew people who were infected. What I still have to say, I don't want to underestimate what the Ebola virus caused, but the strange thing is that while normally in this rainy season many people die of cholera and malaria, now only people die of the Ebola virus. In itself these diseases initially have the same symptoms.
When I went back home I had to be at the airport 6 hours before departure. Before I entered the airport I had to wash with chlorine. On the airport I my temperature was taken every hour, I had to fill out a questionnaire everywhere I had been  in S.L. and whether I had health complaints such as nausea and diarrhoea. Finally, a piece of skin was scraped of my hand, to which they could see if I had a virus. Before boarding the plane, I had to wash me again with chlorine. So everything is carried out very carefully.